A collection of photos, memories and present-states-of-being of Chicago's favorite plastic souvenir. 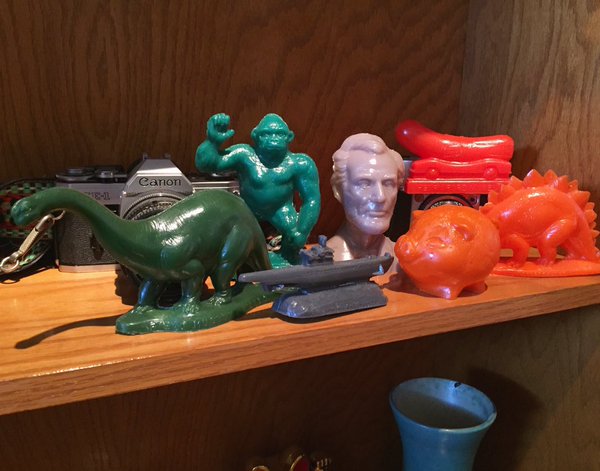 I picked up the Abe Lincoln at the Henry Ford Museum in Dearborn MI. My girlfriend is from near there and after I found out that the Ford Museum had numerous Mold-a-Rama's I had to get the Lincoln ...
Submitted by Jeremy Farmer
We used to melt them with hairdryers when we arrived home. So, um, not exactly tossed but certainly not saved.
Submitted by Jessica Sutor Niekrasz 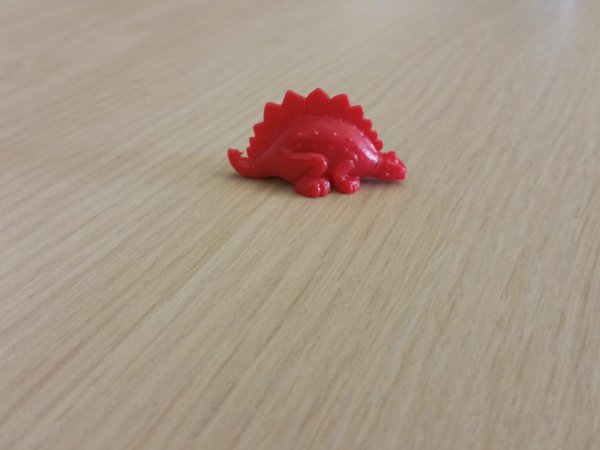 A co-worker gave me it to give to my son, and it just never made it home and now lives on my work desk. I kept it, but it's kind of like that thing on your desk you don't pay attention to until someone calls attention to it.
Submitted by weekendgabe
When I saw the Mold-a-Rama machine at Lincoln Park Zoo, I couldn't wait to show the kids how it works. I yelled with excitement when I spotted it ... Our green gorilla, who appears to be waving, sits on our bookshelf now as a reminder of what a fun day we had as a family.
Submitted by Tarin Lorenz 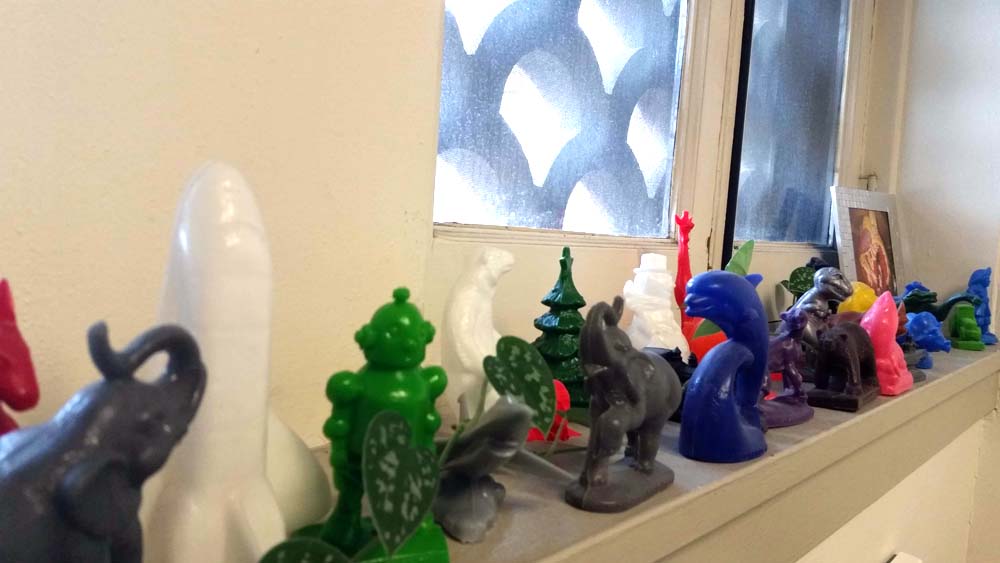 I have them displayed in my office [at the Museum of Science and Industry]. Members love to see them during our Member's Open House, when they get to tour the back office ares of the Museum ...
Submitted by Paul Rotatori
"Thirty years later, I still have the Mold-a-Rama giraffe. I became a zookeeper after graduating college with degrees in wildlife ecology & conservation, veterinary science and zoo animal technology. I went on to work with giraffes while in college! "
Submitted by Suzie Vazquez
Ah, I can remember getting on at the Brookfield Zoo when I was little. Age 5 or so... I don't remember which one, but I remember the shaking machine, the warm animal in my hands... and the smell!
Submitted by Amanda Thomsen 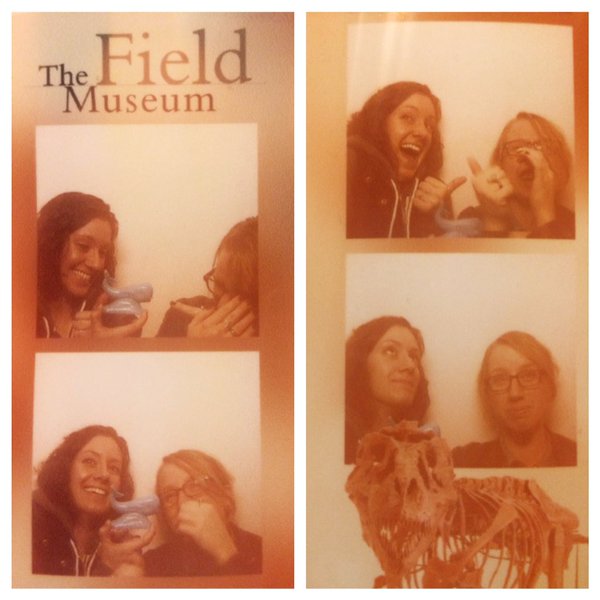 I remember that I kept cuddling it because it was warm and we still hadn't totally thawed from the icy weather ...
Submitted by Taylor Fenderbosch 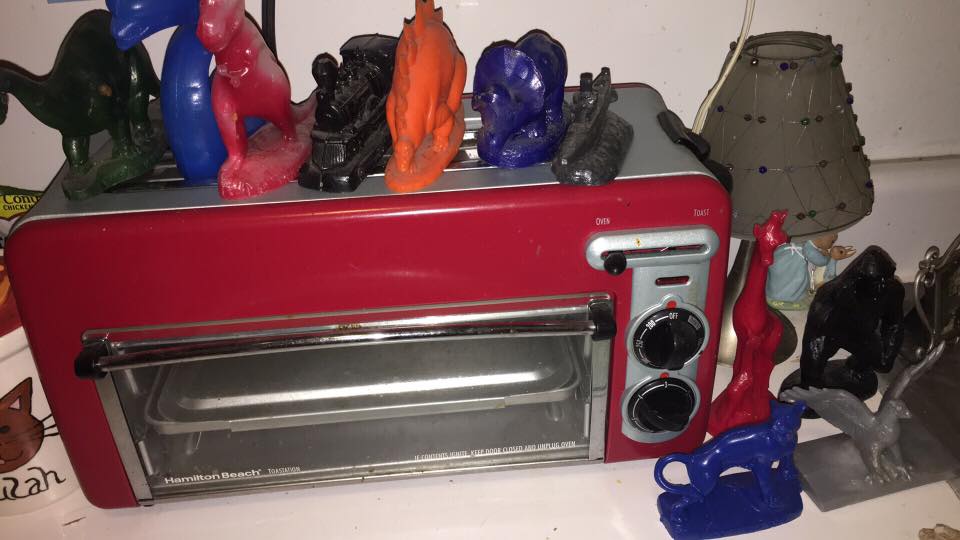 Um. These obviously get moved when I use the toaster.
Submitted by Cheryl Wisniewski

@WBEZCuriousCity He was the perfect addition to my giraffe collection in the '90s. pic.twitter.com/hiCRrACgrR 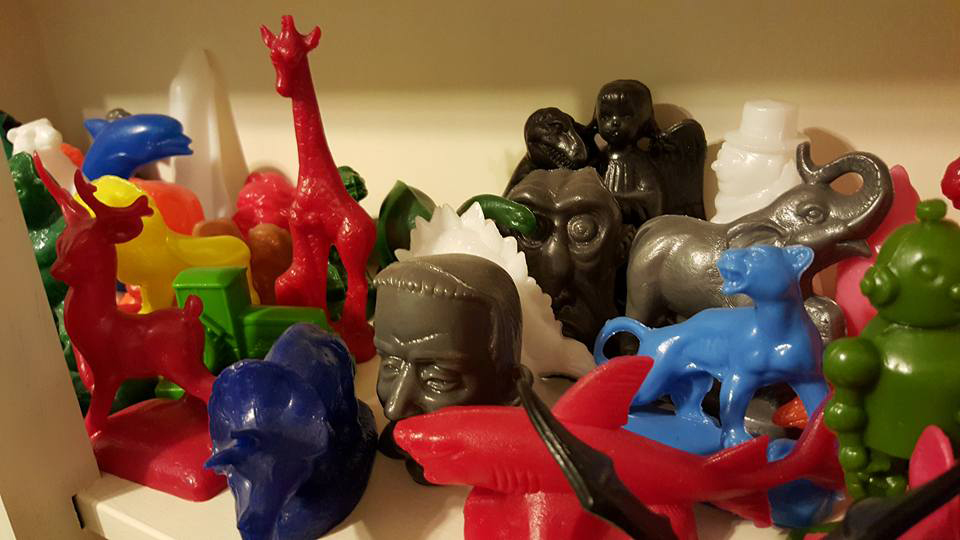 We have a few. They get put on our shelf near other toys.
Submitted by Danielle Tobin

I love the expressions on the monkeys faces. Over time it has grown brittle, and has a little hole but still sits on the bookshelf in my living room.
Submitted by Peter Kirschmann
"Abe made his way into my homecoming and prom pictures and even accompanied me on my wedding day ..."
Submitted by Liz Parisi

"Ummm...we ate them, they kind of are like chewing gum that you've been chewing on for the whole day...I wish I was joking!"
Submitted by Laine Pehta 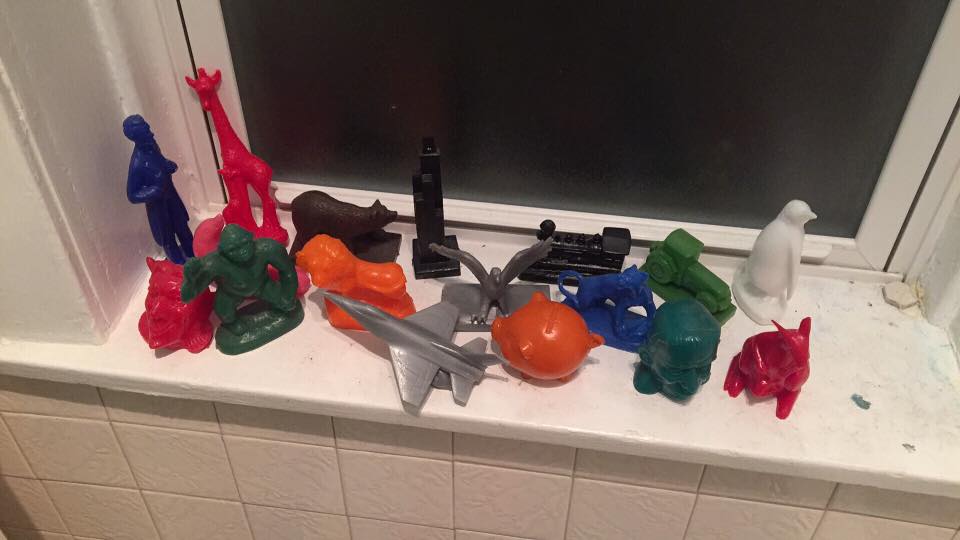 Four more Dinosaurs in another room.
Submitted by Trevor Wills
"When I met my now wife 5 years ago, I mentioned this as a fun thing to do that would allow us to visit local museums and zoos. We started at the Field Museum and we were hooked. We decided that we would try to visit every remaining moldarama machine left in the country. ... "
Submitted by Matt Arient

"I had that alligator for YEARS!! It finally became discolored and the wax got tacky..... My Mom finally said it was time for it to go - Especially since it could no longer be properly dusted ..."
Submitted by Adrianne

@WBEZCuriousCity I got a blue whale mold-a-rama specifically for this Field Museum photo-op. pic.twitter.com/6ca4vdxjis

I got my first one, after longing for one my whole life, at the Mote Aquarium in Sarasota. It's a seahorse. My second one is a gorilla from Brookfield Zoo from a trip there with my husband this summer.
Submitted by Megan hartman Bratkovich

Ours was a souvenir marking one of our first successful outings as a blended family. My then-3 year old stepson (now 13) needed time to get to know dad's girlfriend, which I could totally respect. On a trip to Brookfield Zoo he decided that if I liked gorillas too, I had to be alright
Submitted by Lynn Tefft Hoff

@WBEZCuriousCity oh yeah, and in the rain on Halloween to pick up these gems at @brookfield_zoo. pic.twitter.com/qR6yzOqd8x

The smell of field trips!
Submitted by Courtney Perkins
Caption